What do 350 of the most famous cocktails ever have in common? All share one special key ingredient, born of one man’s vision and passionate determination to create a liqueur the world would love. Every professional mixologist knows its power to impart aromas and amplify flavours. Its iconic square bottle is recognised at a glance.

It is, of course, Cointreau. In last the two years, the growth of at-home mixology has bolstered Cointreau’s already healthy sales to impressive levels.

Who has never heard of or tasted a Cosmopolitan, a Side Car or a White Lady – or probably one of the most popular cocktails of all time, the Margarita? These legendary cocktails made with and even inspired by Cointreau epitomise the power of the liqueur, whose story begins back in 1849. That year brothers Édouard-Jean and Adolphe Cointreau opened the doors of their distillery in Angers, France, to make liqueurs from the wild fruits of the region.

Édouard Cointreau, Édouard-Jean’s son, spent his early childhood in the distillery surrounded by the aromas of fruit. Édouard was determined to become a Master Distiller and follow in his father’s footsteps.

As Édouard came of age, he noticed consumers’ interest in the taste of oranges, which at the time were a rare and exotic commodity. Édouard realised that orange was a universal flavour, as appealing to men as it was to women.

“I HAVE THROWN MYSELF PASSIONATELY INTO RESEARCHING THIS LIQUEUR.”

At the time, orange-flavoured curacao liqueurs were widespread, with many firms developing their own unique recipes.  Édouard tasted most of them, finding them to be less than sophisticated and much too sweet. So he set out on a quest, travelling far and wide to collect as many varieties of sweet orange peel as he could. He was sure they would complement the bitter orange peels used exclusively up to that point, creating a new balance for his orange liqueur.

In his laboratory, Édouard experimented with distilling the fruit many times over, attempting to create a perfectly balanced liqueur. He worked alone, doggedly striving, hoping, doubting… and starting all over again. In his journal, he wrote:  “I have thrown myself passionately into researching this liqueur, which I wanted to combine the purity of crystal and a beautifully subtle flavour based on a perfectly harmonious combination of sweet and bitter orange peel.”

The liqueur was remarkably transparent – a perfectly balanced, crystalline liquid with three times the concentration of orange aromas and significantly less sweetness than other products on the market.

The taste was unique, the aroma more subtle and complex than anything that had gone before. 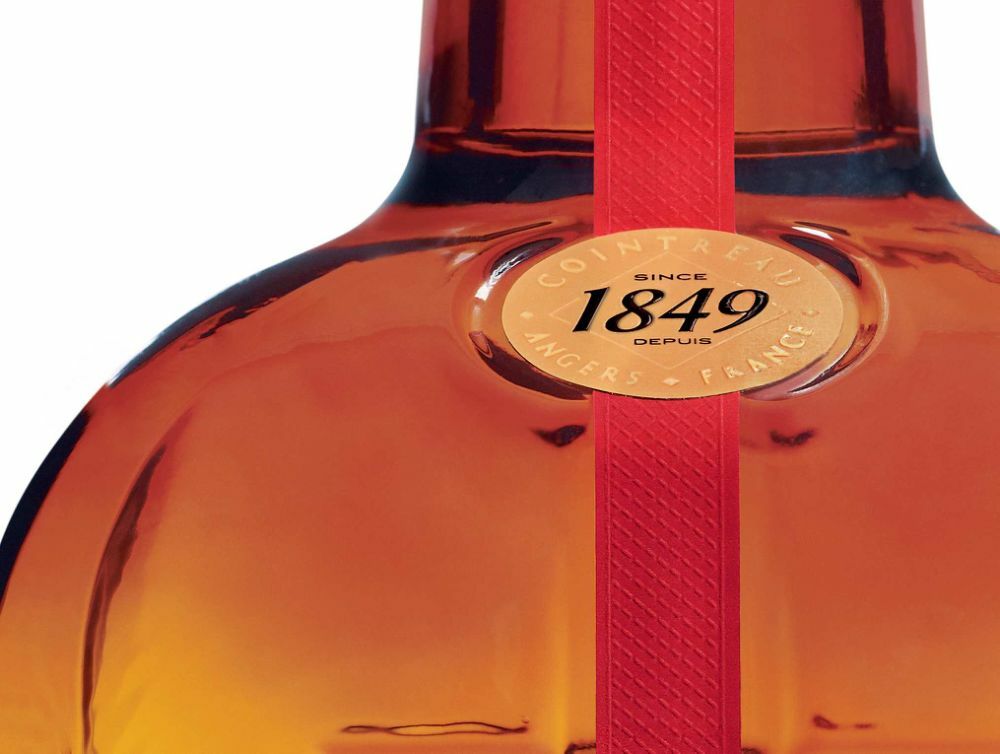 The bottle that Édouard selected had another special feature. Its unique design allowed it balance on any of its four corners. This signifies the 4 perfectly balanced ingredients in Cointreau – sweet & bitter orange peels, water, sugar and alcohol.

While other liqueur-makers dressed up their liqueurs with fancy names and complicated label designs, Édouard designed a simple label that imparted an air of elegance and good taste.

It wasn’t long before Édouard’s success attracted a host of imitators. Soon, numerous fraudsters and counterfeiters were using the Triple-Sec name illegally.

In another act of genius, Édouard revised the brand name, removing the words “Triple-Sec” from the label to rename his liqueur simply “Cointreau”. It was a risky move, but one that paid off. The name became the brand, and Cointreau assumed its rightful place, standing apart from competing products.

In just 20 years, the square bottle had travelled around the world, established itself on every continent and made its name in most major capital cities.

“DON’T JUST ORDER A TRIPLE-SEC: INSIST ON A COINTREAU.”

Édouard, the creator of Triple-Sec, died in 1923, entrusting his fast-growing empire and legendary liqueur to his two sons, Louis and André.

In 1925 Louis introduced a new advertising slogan: “Don’t just order a Triple-Sec: insist on a Cointreau.”

Even then, the product’s reputation was already so well established that Cointreau could do as it pleased. It had already appeared in some of the earliest cocktail reference books (Cocktails: How to Mix Them, 1922). Many bartenders were seduced by the transparency and versatility of the liqueur. They gave Cointreau a leading role at the heart of their creations.

The original Margarita, created in 1948 by American socialite Margarita Sames, is a prime example. Planning a pool-side party at her vacation home in Acapulco, Margarita wished to surprise her guests with a uniquely refreshing cocktail.

Having tasted Cointreau’s exceptional flavour and complexity, Margarita decided to combine it with Tequila and its classic lime and salt accompaniments. The Original Margarita Recipe consisted – and still does to this day – of 50ml of Blanco tequila, 20ml of fresh lime juice and the special ingredient that ties it all together, 30ml of Cointreau.

With a spectrum of more than 40 olfactive notes, Cointreau is a captivating ode to orange on its own and an enhancer of other flavours when mixed. All of which makes it a sublime choice for creating stunning combinations and adding a subtle sweetness.

In a Margarita – as in so many other cocktails – the Cointreau acts as a flavour amplifier, bringing balance, depth and unrivalled freshness to the mix. 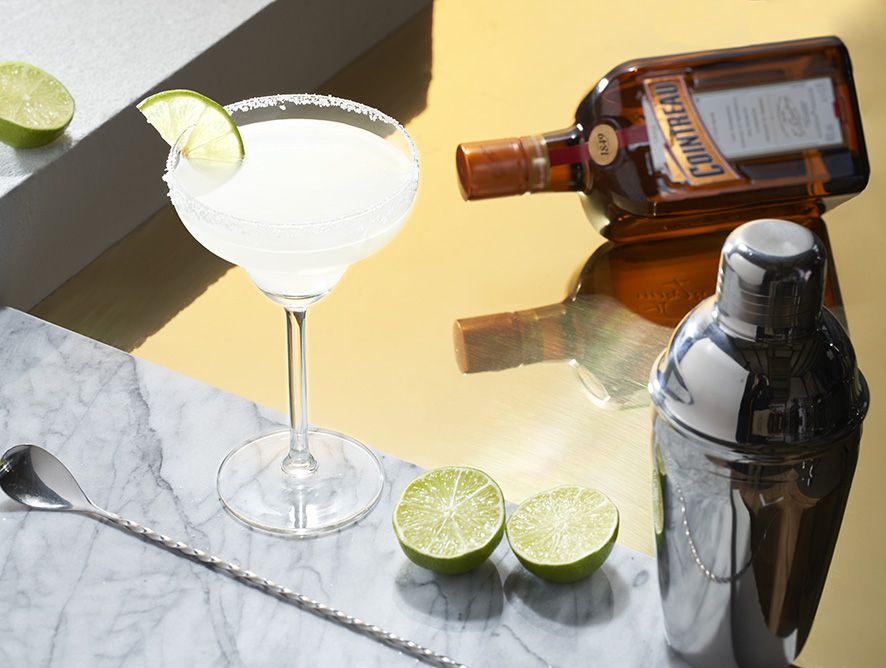 “A MARGARITA WITHOUT COINTREAU ISN’T WORTH ITS SALT”

An independent study on various Margarita recipes shows that an original Margarita made with Cointreau demonstrates superior ‘organoleptic’ qualities.  It delights the senses with a very aromatic, fresh, and balanced sensory profile. (what study? We need to reference this)

As Margarita, herself so famously remarked, “A Margarita without Cointreau isn’t worth its salt.” We’d argue no mixologist worth their salt would use anything else!

Today, the ubiquitous Margarita is the number 5 most popular cocktail1 and the most famous tequila cocktail globally. It tops the list of the most popular cocktails in America2. And it’s almost as popular here in Australia, where this tart, tangy classic makes the perfect summer libation.

With no less than 56 delicious Margarita recipes to try, the official Cointreau Australia website offers a host of tasty twists on this classic.

“THE SAME AS IT WAS IN THE VERY BEGINNING”

Today, over a century since their landmark liqueur was created, the Cointreau family still embraces the same values and is driven by the same passion. Nothing in the content or approach has changed since Édouard Cointreau perfected what he hoped would be a revolutionary, timeless liqueur.

“If the nature of Cointreau had changed, it would no longer have the aura it has today and would undoubtedly not be seen as a cut above the other Triple-Sec offerings on the market,” says Carole Quinton, Cointreau’s Master Distiller.

“Édouard Cointreau developed a complex and quite simply perfect recipe, and we follow it to the letter. I like the idea that what the Cointreau consumers are drinking today is the same as it was at the very beginning.”

At Spirits Platform, we’re here to help you make the most of that legacy. With summer almost here, there’s nothing like the incredible taste and aromas of Cointreau to bring added zest to long-overdue gatherings, whether at home or on-premise.

To stay in touch with the latest trends, distillery news, new releases and take advantage of exclusive offers for our subscribers, please subscribe here.

Get in touch with our Spirits
Platform representatives