Matt Hofmann, Master Distiller and Co-Founder of Westland American Single Malt Whiskey recently visited Australia for the first time and was excited to share and provide us with insights into why and how Westland Whiskey is a single malt unlike other single malts. He explained Westland Whiskey through its combination of its signature five-malt barley bill together with American oak casks – two things practically unheard of in the old world of single malt scotch whisky – is a unique proposition that is rooted in provenance.

Just as the traditional style of single malt from Scotland emerged as a reflection of regions such as Islay and Speyside, so too Westland’s whiskey stays true to the provenance of its Pacific Northwest home – Seattle, Washington USA.

Matt explained that it was provenance that led him to produce single malt whisky in the US. The Pacific Northwest climate is too cold to reliably grow corn (used to make bourbon) and is quite similar to north-west Europe, so barley grows really well in Seattle.

The Westland Distillery started in 2010 and its first release of American Single Malt Whisky began in 2013. In March 2016 Westland was named World Craft Producer of the Year by Whisky Magazine and has been continuously awarded dozens of awards. See full list of awards here.

The proposed definition of American Single Malt Whiskey is:

MADE FROM 100% MALTED BARLEY

DISTILLED ENTIRELY AT ONE DISTILLERY

MASHED, DISTILLED AND MATURED IN

THE UNITED STATES OF AMERICA

MATURED IN OAK CASKS OF A CAPACITY NOT EXCEEDING 700 LITERS

There are 4 core elements of the Westland House style.

Westland’s water source fed from the nearby Cascade Mountains is low in mineral content with a neutral pH.

The Wood Program consists of:

While Westland uses the variety of oak listed above, they fill predominately into slow growth, air-dried Virgin Oak, which brings sweetness and approachability to their whiskies.

Westland’s use of a unique Belgian Saison Brewer’s Yeast is a big departure from tradition that contributes incredible aromatics and notes of citrus, clove and red fruits during fermentation.

Intrigued by Westland’s approach to whiskey making we had a Q & A with Matt Hofmann to find out more about how and why Westland American Single Malt whiskey is so unique.

How & why did you become interested in making Whiskey and in particular, single malt whiskey?

The origin of my interest in whiskey certainly was its flavour. I didn’t have family in the whiskey business or family drinking whiskey. Growing up I was really interested in flavour in food. When I learnt about whiskey, the beauty of it was that its flavour was so simple on the surface of it, made with just 4 ingredients. Yet it can taste so different if you know how to work with those ingredients and that’s what was appealing to me. The more I got into it, I realised the style of whiskey for the region, should be making was single malt whiskey. It seemed like the right thing to do and that was authentic to the Pacific Northwest region and we were clear of that direction from the beginning. We knew we were doing something new.

How did you become Master Distiller?

In America, we look at the concept of a “Master Distiller” in a different way compared to Europe. In America, the Master Distiller is responsible for production from start to finish. This is in contrast to the European idea of becoming a “master” distiller by some combination of apprenticeship and time. I much prefer the American concept. Although I went through a postgraduate studies program in brewing and distilling in Scotland, which was great, I don’t believe in the concept of “mastering” something, including distilling. It’s always changing and innovating, and you never truly stop learning. If I mastered the subject, I’d get bored!

What innovation/s are you most proud of?

The one I am most proud of, was the first big one we did which was looking at the use of various malts we use. It is part of the core of our philosophy.

I am also proud that we are making a single malt whiskey that is different from Scotland. The idea of American Single Malt whiskey and not just trying to be a copy of Scottish whisky, we are making a style of whiskey that is unique and we are proud of that. We feel confident that our whiskey is compelling on its own without needing the crutch of ‘oh it’s just like Scotland’.

We’re making single malt whiskey in Seattle, and that is provocative on 2 fronts – we’re not in Scotland, and we’re Americans not making bourbon. The fact that we’re making whisky in Seattle on its own is different from other single malts but the way that we do it and look at those raw ingredients is fundamentally different. What makes it special is that we are playing by the same rules as those making whisky in Scotland. Everything we do, they can do also, but they chose not to. Our use of roasted malts bring about a lot of malting flavour to our whiskey. Most distilleries say that 80% of flavour comes from the cask, but I don’t believe in that, or certainly that’s a choice. Most distilleries say that barley doesn’t have any flavour, something Westland strongly disagrees with. Fundamentally the whisky industry in Scotland is oriented towards maturation and ageing. We’re looking at flavour from the ground up, the way that brewers and wine makers, chefs or bartenders look at flavour – sourcing the best raw ingredients. For some reason that concept has never made the jump in whiskey-making. We’re drawing a lot of flavour from the raw ingredients not just the malts. Even the oak, they say casks make a big difference to flavour, but we’re using a very high quality grade of oak that isn’t used in the whiskey industry and the end result is spectacular, it tastes wildly different from Scottish single malts but the flavour we get out of it is incredible.

What is the best way to drink Westland Whiskey?

Its whichever way you like to enjoy it. I like to drink it neat, but when it’s really hot, I prefer one big ice cube because it dilutes slower. It’s also great in cocktails – for example Westland American Oak, our flagship whiskey, makes the best Manhattan. A thing some people forget that a good whiskey in a good cocktail will make the cocktail even better. In things like a Manhattan it really makes a difference. My second favourite is a Negroni but with whiskey in it and it makes a huge difference.

Tell us one thing that most people don’t know about Westland Whiskey?

The PPM of our peated malt is 55. But that is in the raw peated malt but its coming from Baird’s, Inverness, Scotland. We bring it over, mash, distil and mature it; but in our Westland peated expression we take that spirit and blend it with our 5 malt spirits and the proportions are about 40-60 peat / 5 malt spirit. The end result is like you had a 20PPM average.

What is the one thing you would like Australian Bartenders to remember about Westland Whiskey?

I’d like them to remember that what we’re doing is rooted in authenticity and what we are making is not a Scottish Single Malt whisky. The Japanese were the first to provide the idea that whisky outside of Scotland can be good whisky. In a similar way, we are trying to do is something that is our own with American Single Malt whiskey. It’s not going to taste like other products, it’s authentic and it is its own thing. People are looking for something new all the time. Westland Single Malt whiskey is not only new, its connected to a place and is authentic. Today more than ever before people are craving authenticity these days. Everything that you get from Westland is committed to that philosophy of authenticity and terroir. Its evocative of the Pacific north-west and its unlike anything else and its thoughtfully made.

Who do you think drinks Westland Whiskey today and who will be drinking it in 50 years?

A lot of the early adopters drinking Westland today are hardcore single malt whiskey aficionados who are open-minded. It’s those whisky drinkers who have their ears attuned to innovation in whisky. But 50 years from now, the people drinking Westland whiskey will be those who care about the raw ingredients and provenance of things. That is a lifestyle philosophy that if you care about that in food, then it’s impossible not to follow that philosophy in whiskey. This is a growing trend and I hope this philosophy will continue to grow and therefore they’ll be drinking Westland for that reason.

Each exhibit the fundamental intention of their house style: a balanced, barley-forward whiskey that honours tradition but also moves it forward in a new way. Westland core expressions are all made from 100% malted barley, fermented with a unique Belgian Saison brewer’s yeast and matured in a variety of cask types—leading to new and distinctly American flavour profiles. From that starting point, each expression offers a variation of a house style that departs from expected conventions of single malt whiskey in their own way.

Westland Sherry Wood is the interpretation of one of the world’s most popular styles of single malt whiskey. Westland celebrates this custom by filling hogsheads and butts sourced from the same region the Scottish find their casks. But what they do with them differs.

Westland Peated is the truest to tradition but still represents a unique perspective on the world’s oldest style of whiskey. While many peated whiskies follow the very traditional model of 100% peated malt, displaying a raw and heavy smoky character, Westland works to build on this tradition with new world sensibilities. 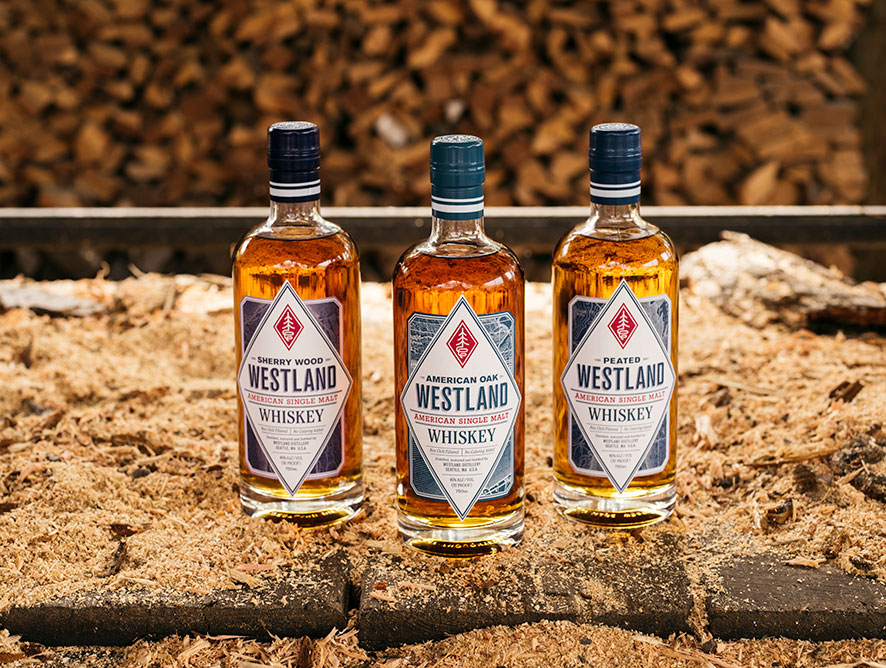